Find your dream property in the Channel Islands 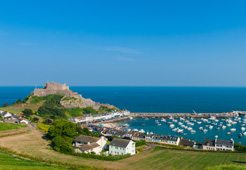 Find your dream property in the Channel Islands

Situated in the off the coast of France, the Channel islands consist of two major islands which are Jersey and Guernsey, making up two of the three self-governing British crown dependencies (the other one being the Isle of Man). Other small islands that are inhabited in the Channel Islands include Alderney, Sark, Herm, Jethou and Brecqhou.

To figure out exactly which channel island is for you, let's delve into what exactly makes these islands a great place to live...

Being the second biggest Channel Island, Guernsey offers plenty of natural coastal beauty and a peaceful way of life. Because Guernsey is a small island, real estate can be limited, especially compared to all the rest of Europe. Being a British crown dependency, Guernsey’s government makes its own laws and restricts who can become a resident on the island.

So why is Guernsey a great place to live? With its idealistic location in the Channel Islands, from Guernsey it’s easy for residents to travel to the UK, France or even another part of Europe with ease from Guernsey Airport. Guernsey offers some stunning scenery and a very pleasant climate compared to Britain's mainland.

Alderney is the third biggest Channel Island (3 miles long & 1 mile wide) that is part of Guernsey and is the northernmost inhabited Channel Island. Here you can find a range of beautifully located properties by the coast as well as inland.

Jersey is the largest Island of the Channel Islands. It is also usually the warmest climate with more sunshine than the rest of the channel islands due to its southern position, just 19 miles off the coast of France.

Jersey, along with the rest of the Channel Islands, has their own government but are represented by the UK in international affairs and they have one of the lowest crime rates in Britain.

If you are looking to live in Jersey, you can expect beautiful beaches with crystal clear water, excellent restaurants and an array of tax free independent shops. The Island is very safe and family friendly with many jobs available.

If you’re looking to live in any of the Channel Island you are only able to seek residence if:

Here at Propertyskipper we offer the best real estate in all of the Channel Islands by the most reputable estate agencies. If you are looking to find your dream Channel Islands property, contact us today!